Frequently heard; there is confusion between weather and climate. For real? Is it not due to poor definitions? 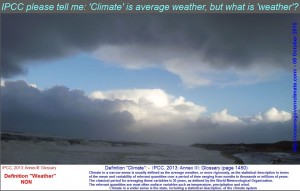 Talking about weather foremost requires selecting on what weather pattern one needs or wants to talk about. The British know it, others as well. For ordinary men it may be entertaining, but in science it is a lack in seriousness and competence. Weather components or explanations can go in many hundred items, for which science offers commonly only a very general explanation (NASA):

“Weather is the way the atmosphere behaves.”

What an enlightening statement! That is definitely not a serious definition, and for any scientific work absolute useless. Nevertheless science does not hesitate to say: “Climate in a narrow sense is usually defined as the “average weather” or more rigorously, by statistical description.” (See image)

Now many ‘weather situations’ and other events can be linked to climate and climate change, and open a wide field for confusion, nonsense talking, wrong research trends, and costly misplaced political investments (1).

One day the world will have to pay a heavy price for the lack of proper academic terminology, as it prevents to come up with definitions that put the oceans first:

(1) The 2015 United Nations Climate Change Conference, will be held in Paris from November 30 to December 11, aiming to establish funds rising to USD 100 billion per year by 2020.

34 thoughts on “Weather and Climate? Do they know what they are talking about!”