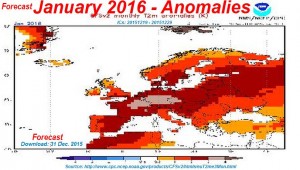 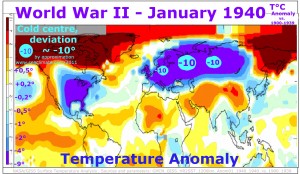 months (MORE). A corresponding situation existed in late 1939. But between the temperatures January 1940 and assumed January 2016 the difference could not be bigger. Don’t ask meteorology to explain. 76 years have passed without ever been interested in the matter.
But while it is expected that December 2015 is the hottest on record, December 1939 was the beginning of an extreme cold winter in Europe. The winter was special because it was the coldest since the end of the Little Ice Age around 1850, turning a global warming trend into a three decades lasting period of cooling, which happened after four months war, in World War II. Why caring about winter 1939/40? Why took “General Frost” reign as early as mid-December 1939? Why understanding too much of climate change and man’s impact in this matter?

Up-Date Met-Office 31 Dec: “…..the specific nature of this December’s extreme weather might be linked to the detailed structure of this El Nino, to the warmth of the north-east Pacific Ocean and to their combined effects on the atmospheric circulation………So from basic physical understanding of weather systems it is entirely plausible that climate change has exacerbated what has been a period of very wet and stormy weather arising from natural variability.”   Met-Office 31 Dec. 2015: “What’s been happening to our weather?”

Sorry, the water around the UK is important for weather in the UK. Psst: Don’t tell Met-Office what is easy to see in two previous posts

The recent run of unsettled, wet weather will continue this week with Storm Frank (MetOff-29Dec15), the sixth named storm of the season 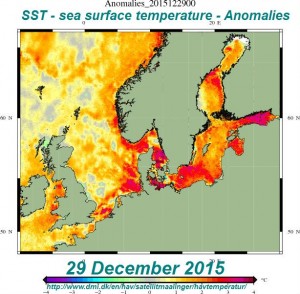 arrives. December has already been a record breaking month for rainfall in some parts of the UK, with exceptional amounts of rain falling onto already saturated ground (28Dec- HERE). Wet weather will continue. Storm Frank (955 hPa) south-east of Greenland Tuesday morning is on the way (29 Dec) –Fig 1 (left)–
How much of this situation is due to Northern Europe’s condition, high air pressure East of the Baltic (Fig.1), and high sea surface temperatures from Faroe Island to St. Petersburg (Fig.2 – right). No wonder that Met-Off is surprised, if not taking the North Sea and Baltic into account, and not asking why? Excessive use of the regional seas should not be ignored. HERE & HERE

Met-Office update: 30 December 2015 – Heavy rain and strong winds associated with Storm Frank have affected many parts of the UK -HERE- 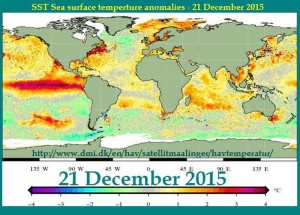 Recent weeks have been warm in Europe, well above average. The North Atlantic sea surface temperatures are below average, but the ocean north of Iceland, and the North Sea and Baltic, well above. That warms Northern Europe, at a time when the influence of the sun is modest and the seas heat the region significantly. Not necessarily everyone understands it. According to the UK Met Office, the exceptional warmth in Britain and 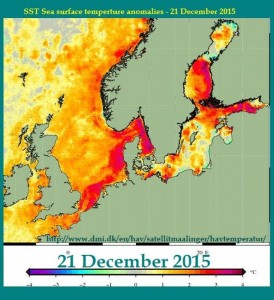 northern continental Europe is linked to the strongest El Niño ever recorded, causing unusual weather from Britain to Australia, reports The Guardian (Dec.20, 2015): “What we are experiencing is typical of an early winter El Niño effect,” said Adam Scaife, head of Met Office long- range forecasting.

What Mr Adam Scaife does not tell us, how a warm-water –section in the Pacific can warm the water
around Europe from Gibraltar to Svalbard/Spitsbergen?
Without mentioning a correlation between warm air temperature and the warm seas in Europe is of little help. Not even mentioning the sea water conditions is weak science, and not worth to be taken serious.

For the Belgian Professor of Chemistry István Marko “it is a mystery how any serious environmental organization holding the belief that man-made CO2 emissions are damaging global climate would be satisfied with such a powerless agreement, which we are now seeing as being nothing more than an illusion of a binding treaty.”  Notrickszone 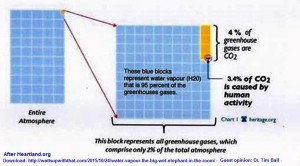 Prof Marko has no good word for COP21, seeing the rich countries engaged in “wishful thinking“, but are his thoughts any better? As a man of chemistry he should know more about climate affairs, and what makes work. More than two-third of weather and climate is done by water, in the air and oceans. When Marko calls COP21 as no useful or showing serious results, one wonders what he offers instead. Too little to credit his thoughts higher as he credits COP21: a “grand illusion“; a “resounding failure”. Either Prof. Marko tells us something about the “climate-water-system”, or he keeps his mouth shut. 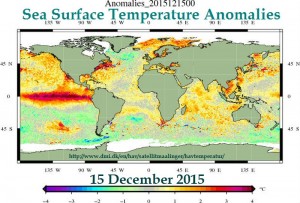 There was an El Nino active in late 1939. Since May 2015 a ‘Monster Godzilla El Niño” is promulgated by science and the press. In Paris COP21 agreed a new climate treaty on global warming few days ago on Sunday the 13th December, without taking note of the real world.
By mid-December 1939 in Northern European waters sea icing commenced:
__From Denmark first signs of ice were reported around mid-December and they increased soon in the inner closed waters. 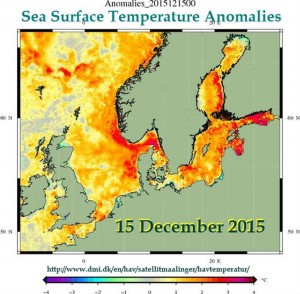 _ Icing emerged on river Elbe on the 16th of December 1939, intensified massively before month end, and continued with extreme sea ice conditions for 90 days –throughout the regional seas- until mid-March 1940.

This year, with ‘normal activities at sea’, North Sea and Baltic are much warmer than average (Fig.1), far away to freeze. That was different seven decades ago. Naval war has churned the sea, cooling it down, sea ice established early and lasting, for which only man was to blame! Easy to find out. But COP21 remains in cloud-cuckoo land.

The long way to understand climate 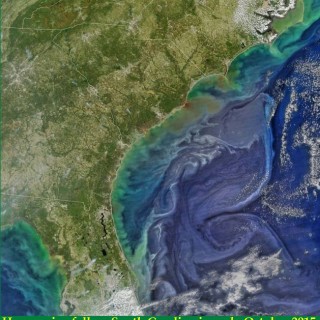 Since 2011 a new satellite system collects data on long-term climate change and short-term weather conditions. Once and a while it produce nice pictures, as recently, when damaging heavy rains fell on South Carolina in the southeastern United States at the beginning of October 2015. Much of that water had, by mid-October, flowed into the Atlantic. The image, a Visible Infrared Imaging Radiometer Suite (VIIRS), shows the runoff as it interacts with ocean currents on Oct. 15. Climatologists use VIIRS data to improve our understanding of global climate change (Source).

Beautiful pictures not necessarily improve understanding. The oceans are deep and the image only shows the surface layer, to which satellite data contribute at most a fraction, if any useful information about the ocean interior at all. Enjoy the picture, but remain reserved that it contributes significantly to understand oceanic influents on climate, as oceans govern climate.