The name “oceansgovernclimate” is program. Measures to protect climate without profound information and understanding of the oceans are costly, insufficient, and delay action to prevent anthropogenic “ocean change” that probably cause climate change. Since long we support the fascinating theory on the impact of naval war on climate, as outlined in the “Booklet on Naval War changes Climate”. The two World Wars demonstrate conclusively how easy human activities induce alteration in the sea-structure that leads to climatic changes.  ‘Human activities’ cover everything, from shipping, fishing, leisure boats, and off-shore platforms. In so far the two major naval wars served as ‘large field experiments’, as summarized in the conclusion of the Booklet “Can WWII go by unnoticed?”, from which the following excerpts (p. 94f, PDF) are taken:

QUOTE. “The aim of the book was to leave no doubt that the ocean determined where the climate was heading to. In this scenario, CO2 played only a minor role. CO2 was definitely neither the source of the “Big Warming Bang” (in 1918, far in the North of the North Atlantic), nor of the global cooling (from 1939 until the 1980’s).

Oceans and seas are very complex, which are not well-understood not even today. But war at sea during two major world wars was a tremendous force that has left its trace on the oceans. Two climate changes during the last c 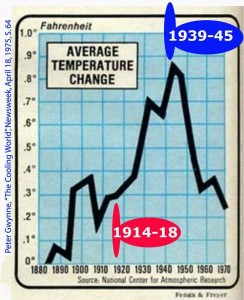 entury prove our thesis. Winter temperature had risen in Spitsbergen with 8ºC (1918–1939). The whole Europe got warmer every year. The German Chancellor Adolph Hitler started the war in 1939 and immediately North Europe was dragged back into the Little Ice Age, which implied climatic conditions not experienced for over 100 years. Two arctic war winters followed in the region with extreme naval activities until the war at sea went global, in 1942. And what followed immediately after that? There were four decades of global cooling, affecting particularly the Northern Hemisphere, because here naval war had the most devastating effects and left a definite fingerprint in the downturn of global temperatures. Even though our book section on naval warfare between 1942 and 1945 is short, the connection between naval forces and global cooling is overwhelmingly convincing.

Winter temperatures of more than 5ºC below average are totally out of tune. Weather statistics cried for attention, but nothing happened in this respect over more than six decades. Until now, only one of the most ruthless WWII warmongers, the German Vice-Chancellor Hermann Goering, commented the arctic winter of 1939/40 by saying that a higher power has “sent” the harsh winter conditions. It is time to prove him wrong and to blame him, Hitler and the Nazis for having caused the arctic war winters and the global cooling………………

So far, the statements seem to contradict each other. But in a wider sense, they are pretty logical. Someone who claims to be able to explain current global warming must implicitly be able to explain a pronounced global cooling which affected the climate only half a century ago. Ignoring the event for more than six decades is even more bizarre than relating phenomena to a ‘higher power’.

If this investigation succeeds in proving that two major wars changed the course of the climate twice in the last century, it will also prove that shipping, fishing, off-shore drilling, and other ocean uses had constantly contributed to the global warming since the start of industrialization, more than 150 years ago.

A new chapter on the climate change issue could be now opened, giving more attention to oceanic phenomena under the influence of the potential of the “1982 United Nations Convention on the Law of the Sea”.  All research would lead to a better understanding and protection of the stability of our short-term weather and long-term global climate.” UNQUOTE
Material available at: http://www.1ocean-1climate.com/.

„Please find attached the first WorldPress contribution,suggesting that the four images are enlargeable.„