The Intergovernmental Panel on Climate Change (2007 IPCC Report) determine: “Water vapor is the most abundant and important greenhouse gas in the atmosphere. However, human activities have only a small direct influence on the amount of atmospheric water vapor.”
IPCC is ignorant and wrong on the influence of human. Since industrialization human activities churn and turn the sea surface layer down to a dozen and more meters (Fig.1). Several hundred thousand ship propellers, and million other activities exchange warmer with colder water, or vice vers, and modify the salinity structure. That is the gate by which the amount of vapor is generated.

These ocean uses affect the part of the ocean that is the major weather maker up to several weeks if not many months. The state of the upper 50 to 200 meters sea surface layer govern climate up to several years. The weather making mechanism is water vapor, and that is controlled by the state of the oceans. In comparison CO2 is just 0.04% of the total atmospheric gases (Fig.2). Whether it has a significant role depends also foremost on the conditions of the sea and its generating impact on vapor. IPCC’s ignorance disguise politics and the general public from addressing the climate change issue properly, while the skeptic community fails to challenge IPCC in this respect, as can be seen in a post at WUWT. The link concludes:

However, as Aldous Huxley said,
“Facts do not cease to exist because they are ignored.”

The basic idea is based on a post at WUWT
Fig.1 with more explanation.

Bitter Temperatures to Put Northeast Under Deep Freeze on Valentine’s Day (nbcnews – Feb.14/2016)
Bitter temperatures flirted with record lows on Sunday as “life-threatening” conditions put millions across the country in a deep freeze for Valentine’s Day. More than 38 million people from the Plains into the Midwest and East Coast were under winter-storm warnings or advisories

overnight, according to The Weather Channel. The coldest air mass of the winter brought the thermometer down to minus 6 degrees overnight in Minneapolis, while New Yorkers were urged to take “extreme precautions” against wind chill.

NYDAILYNEWS 02/15/2016: While New York City had its coldest start to Valentine’s Day in 100 years on Sunday, it would seem balmy compared with the wicked wind chill at upstate Whiteface Mountain. As temperatures dropped across the Northeast from the blast of a polar vortex, the wind chill at Whiteface, near Lake Placid, made it feel like a body- and mind-numbing minus 114 degrees (-81° C) late Saturday and into Sunday. Central Park could only muster a minus 1 degree.
Posted in Uncategorized

Unfortunately, back in summer 1939 there was no voice that warned Adolf Hitler and his consorts that a major war in general, and a naval warfare in particular, would bear a high risk of dangerous interfering with weather and atmospheric conditions, with unknown consequences.

In addition, no one mentioned how foolish it would be to start with naval war activities in northern European waters in early autumn. It would release the heat stored in the North Sea and Baltic earlier than in other years. This heat is an essential contributor to moderate winters in Europe. No, Reichskanzler Adolf Hitler and the High 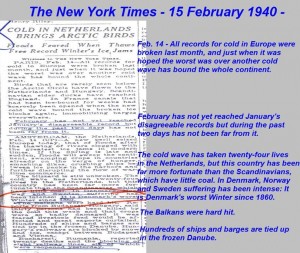 Command of the Wehrmacht had no idea of the risks, neither did their professional advisers. Meteorology failed then and over all decades ever since. Meteorology is still unable to explain what happened seven decades ago, and the few who did, presents unproven claims, as e.g. Professor Stefan Brönnimann assuming a correlation to an El Nino event. Current El Nino winter 2015/16 proves: it as nonsense.  MORE 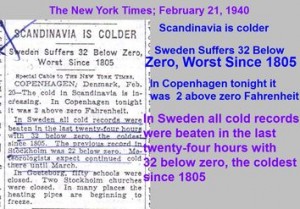 Adolf Hitler’s personal responsibility, for weather and climate modification in winter 1939/40 and beyond, was never raised. That is irresponsible and a great failure of Meteorology and Climatology.

El Niño does not warm the world

When will climate science be able to distinguish clearly between a global-average manifestation of El Niño-driven global weather effects, and 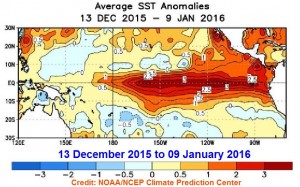 an explanation of global average warming associated with El Niño? Concerning the latter aspect the World Meteorology Organization seems not able and willing to do the simplest considerations (Hottest Year). The feature is about a temporary warmer than normal SSTs across the central and eastern equatorial Pacific (ENSO), which looks like one water bubble or pool. Compared to ocean dimension it is merely “a drop in the sea”, and only a tiny fraction warmer than usual, namely about 0,5 to 3°C, with a little dip down to a depth of 100 meters (max 150m), whereas the mean Pacific depth is 4,280 m. Any rough calculation shows that there is not much El Niño can offer to heat the world and contribute to global warming. The water volume is not more than about 0,06% of the Pacific volume, and the ENSO area with higher than +3°C 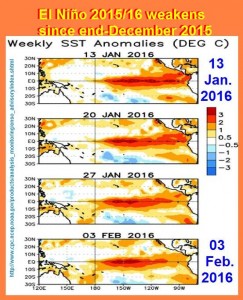 of average may possibly account for about 0,10% (Further details here). All oceans and seas contribute permanently heat to the atmosphere. El Nino is negligible in this respect. WMO should undertake more competent considerations, and talk less empty stuff.

Only by consensus among scientists 2015 is the hottest. Whether that is the case we do not know, as temperature records have been adjusted,

adjusted, and adjusted over several decades. For 2015 NOAA presents a wonderful image, presumably more art than science, with a tiny cold hole between Iceland and Canada. The ‘glowing globe with a blue eye’ is based on global average temperature difference to the period of 1951 to 1980. That is gross negligent if not scam. The 1930s ended with almost as high temperatures as during the last decade with the years 1934, 1931, 1938, 1939 in the top league of hottest years since the end of the Little Ice Age about 1850. In late 1939 World 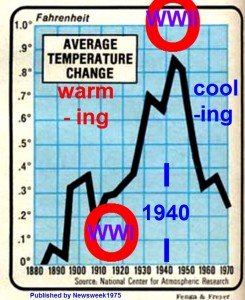 War II commenced. Four month later the winter in Europe was the coldest for 100 years (more HERE and HERE) and subsequently global temperature broke down for decades, recovering only in the 1980s. What a disaster, if science has one day to admit that it was WWII.
Enjoy the NOAA image as art not more.

According World Meteorology Organization: “The global average surface temperature in 2015 broke all previous records….An exceptionally strong El Niño and global warming caused by greenhouse gases joined forces with dramatic effect on the climate system in 2015,” said WMO Secretary-General Petteri Taalas.
In a previous post is assumed that claiming any warming from El Niño is gross nonsense, as the ‘warm water pool’ causing El Niño is too small for any significant global warming impact.

While El Niño goes strong in the Pacific, storm Henry reach Europe today, Fig. 1 & 2 , which could be an interesting case to study, whether this goes 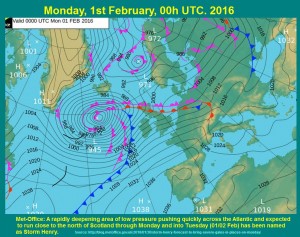 together. But not for met-services preferring to make forecast in the distant future. 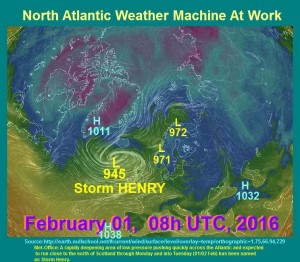 system and were highlighted in a recent Met Office research news article (September 2015).

OGC ascertained immediately that already the first sentence of the report is faulty. That is the crux of climate research.