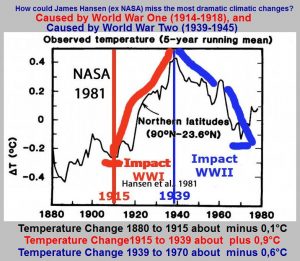 Dr. Judith Curry speaks out on climate science’s fatal flaw but does she understand the climate change matter at least a little bit better? Unfortunately not, or have you heard her ever talking on the overwhelming predominate influence of the seas?

It was in a recent interview on British radio, February 6th [More at WUWT]  that she mentioned climate science’s fatal flaw – the failure to explore and understand uncertainty, as a yet unaddressed issues of how ‘natural climate change’ drivers impact the earth’s climate, which indicates: Not understood’.

Judith Curry is to praise when mentioning:
___”If science can’t explain climate shifts pre 1950, how can we trust today’s climate models?”, and that
___“……the models fail to simulate the observed warming between 1910 and 1940.”

Actually, both time periods are closely correlated with the two great naval war activities about 10 and 7 decades ago. World War I presumably initiated the extreme warming from about winter 1918/19 to winter 1939/40, which saw the commencement of a three decades long global cooling. That is anthropogenic making pure and presumably one reason because computer models fail. But surely not alone!

More important is the most basic lack of understanding. Earth weather (and subsequently ‘climate’) is based on the law of physics 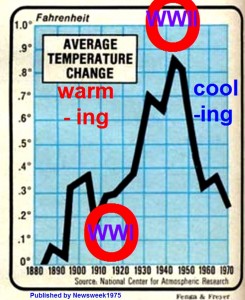 . In this system the ration between ocean and atmosphere is 1000:3, in regard to average temperature about +4°C to 14°C. The vast dominance of the oceans concerning physical parameters is very obvious. If it is too big to understand, to assess, and to feed into computer models, should not allow speaking instead about ‘natural climate change’. A thorough investigation of the impact of the World Wars on the most pronounced climatic shifts since the end of the Little Ice Age about 170 years ago will demonstrate how easy major human activities – at sea – even over a short period of time may influence weather (and climate).

At the end of the interview Dr. Curry encourage people “who have concerns about the validity of arguments alleging man made climate change to continue to speak out about their concerns”, which we pick up by adding to the reasoning above: Any reference to “natural climate change’ undermines serious climate research.