Ignoring off shore industry on climate change is irresponsible 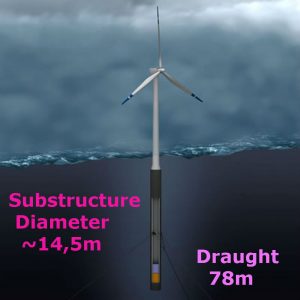 Climatology considers ‘natural variability’ as a valuable factor in climate change matters. Ignoring any human role in this respect is irresponsible.  The latest big issue is floating off shore wind turbines with a structure about 78 meters submerged and 15 meters in diameters. Although a massive obstacle in a permanent moving marine environment the impact and change in ‘natural variability’ in climate change matters is completely ignored.

The concern has been raised in a recent post: ”Why Europe is warming up faster than elsewhere?”  The matter is simple. Off shore installations affect sea temperatures and salinity structure at many locations to about 60 meters below the sea surface.  In Europe the number of off shore wind turbines will account 4000 by the end of 2017. The inevitable consequence is at hand:  “Northern European winters are getting warmer and warmer at a rate higher than global average” as analyzed in a paper by A. Bernaerts (2016).

Now the impact on sea level structure increase further. The world’s first floating wind farm opened on 18 October 2017, off the east coast of Scotland. The 6MW turbines rise 175m above sea level, and extend 78m below the surface of the water, tied to the sea bed by cables. The anchors used to stabilize the turbines stand at 16m and weigh 111 tons. (Details)  Inevitable huge water masses of different temperature and salinity will change between the various sea levels. As an example see Fig. 2 (Northern North Sea – Section 1-4). The sea surface will warm or cool and either warm or cool the air temperature above the scene.

Any use of the oceans by mankind has an influence on thermo-haline structures within the water column from a few cm to 10m and more.  Not even raising and investigating this mechanism is a demonstration that the use of the term “natural variability” is to hide pseudoscience.