A UK Policy paper (2012/2015),: “2010 to 2015 government policy: climate change international action”,  assert in Annex 5 to provide a definition on “climate change” (Link and full text below), but instead speak about statistics related to components of the atmosphere, oceans, cryosphere, and land surface. Actually they say: “Climate is a statistical characteristic“. Such an explanation is meaningless, at least superficial and thoughtlessly. One cannot change something without saying what this something is. This is the first fault, because a statistic is a statistic, and informative only for one individual item of investigation.

Maybe the UK Policy paper refers unsaid to the widely used saying (including the International Meteorological Organization  – IMO) that “climate is average weather”. Although this layman expression is for scientific research and thruthworthy communication hopelessly out of place, the UK Policy paper demonstrates that it does not care at all, respectively that they have little understanding of the issue, when they include into “climate change” also:

Such an all-embracing definition explains noting, and may only serve to lie in the own pocket, or misguide the general public. A clear and meaningful language is a minimum science and politics should use.

“A change in the statistical characteristics of the atmosphere (such as temperature, rainfall, pressure, or winds), oceans (such as heat content or sea level rise), cryosphere (such as extent of sea ice or length of glaciers) or land surface (such as changes in vegetation type) typically sustained over several decades or longer. A change in climate may be due to natural or anthropogenic (i.e. due to human activity) factors, or a combination of both.”

Human-induced climate change is the current, past and future change in climate being driven by greenhouse gas emissions and other human activities, such as deforestation.

The oceans have stripes

In the last post Willis Eschenbach was cited: “we can say nothing about whether the ocean might be warming, cooling, or standing still.” We doubt that it will be possible soon, as the “oceans have stripes”.
A paper by Ethan Gutmann (2008) HERE explains:
“These stripes are not visible without looking very closely, but they are visible through their effect on currents, temperatures, and sea surface heights. They were first spotted in a careful analysis of the Mean Dynamic Ocean Topography (MDOT) dataset, but had to be confirmed by looking directly at ocean buoy and vertical temperature profile data”. Further details (selection):

That is a good question! Willis Eschenbach raised it at WUWT recently: HERE A convincing answer would be invaluable. For years a lot of opinions swirl around. Prof. R. Pielke Sr (2008) regards „monitoring of global average ocean heat content as the appropriate metric to assess global warming.” HERE The IPCC-2007 assumes a warming of the upper sea level 0 to 700 meters, HERE, claiming that “Approximately 7.9 million temperature profiles were used”. Is that a lot? Definitely not, as only three cubic-meters of water have the same heat capacity as an air-column of 1x1x10’000meter. The number of data required would go into billions. The Ocean is huge, deep and cold. 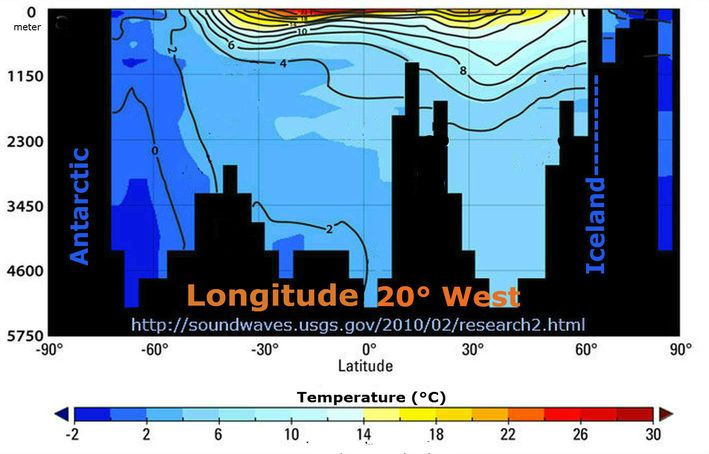 An image from the Atlantic may serve as illustration. It seems Willis Eschenbach recognizes rightly when he concludes his essay:

“we can say nothing about whether the ocean
might be warming, cooling, or standing still.”