Not bad faith may destroy civilization but ignorance
in ocean matters.

climate change in a recent NYT Opinion (Fig.1, 12/13 Aug.2017). His conclusion that the ‘tweeter in chief’ and the Republicans rejecting not just scientific evidence but also obvious lived experience, sound good, is true, but unfortunately in no way better as arguments from those he addresses as climate deniers or climate skeptics. They are mere nay-sayers to all scientific efforts in climate matters, or cry loudly hoax as the old Senator Jim Inhofe (R-Okla.). 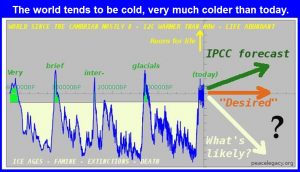 To be clear; climate change is real. Climate change means a change in statistics, and climate statistics have permanently changed over the last several 100 million years. They have also changed since global industrialization started about 200 years ago. One eminent question is, to understand and minimize the role of humankind in this scenario; although the far more important question is, in what direction we are heading. Will it be warmer, will it be colder? The latter does not cross Paul Krugman’s mind. He is only able to discuss his points on the global-warming basis, and that is as ignorant as crying HOAX.

For 30 years we are deceived to believe human-caused warming of the atmosphere. That is naive and recklessly ignorant of the global proportion. Weather and climate is based on water in the air and in the sea;  the ratio is 1:1000. 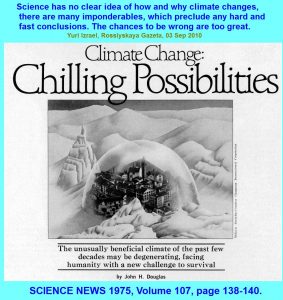 More global warming requires many dozen years. The status of the 4°C warm ocean can shoot the world in a new ice age in few months. More than 95% of our past (Fig. 2) was much, very much colder than our present. A minor shift in this direction is definitely more and quicker destroying civilization as anything else, which we should understand and know pretty soon.

There is no axis of climate evil hampering the debate, but an axis of ignorance on all sides of the spectrum.

___FROM :  the Fabius Maximus website; CONCLUDING:
This is propaganda, characteristic of how activists have conducted their campaign to build support for massive public policy action to fight climate change. They’ve been at it since Hansen’s 1988 Senate testimony. It has not worked.

>>>>>>>EXTRACT>>>>>>>> “The other low-probability, high-impact threat is climate change fueled by increased human-caused carbon emissions. The truth is, if you simply trace the steady increase in costly extreme weather events — wildfires, floods, droughts and climate-related human migrations — the odds of human-driven global warming having a devastating impact on our planet are not low probability but high probability.”