The other day Lomonosov Moscow State University got worldwide attention.  By press release (16.July 2015) a new study was presented: “New Ice Age may begin by 2030”, assuming that:  “The arrival of intense cold similar to the one raged during the “Little Ice Age”, which froze the world during the XVII century and in the beginning of the XVIII century, is expected in the years 2030–2040. “

The study claims it will be the sun. A new reduction of the solar activity will lead to reduction of the solar irradiance. Indeed, solar activity affects the climate. Without the sun ‘climate’ would not exist. But is that enough to rectify the assumption?  Certainly not, sun radiation varies over periods and cycles, which will be reflected in temperatures variation, but never caused a significant climatic change event. For that water is needed, and earth has plenty of it. Not surprisingly, the article not even mentions the oceans. The oceans absorb, store, and release heat, which makes them the driver of climate. Their biggest potential to cause climate changes is the low temperature the entire water mass has, just about plus four degrees Celsius.

Competence in climate research does not go without the oceans. The LMSU study ignores the driver of the climate completely, while admitting: “However, only the time will show soon enough (within the next 5-15 years) if this will happen.” That is not very impressive. 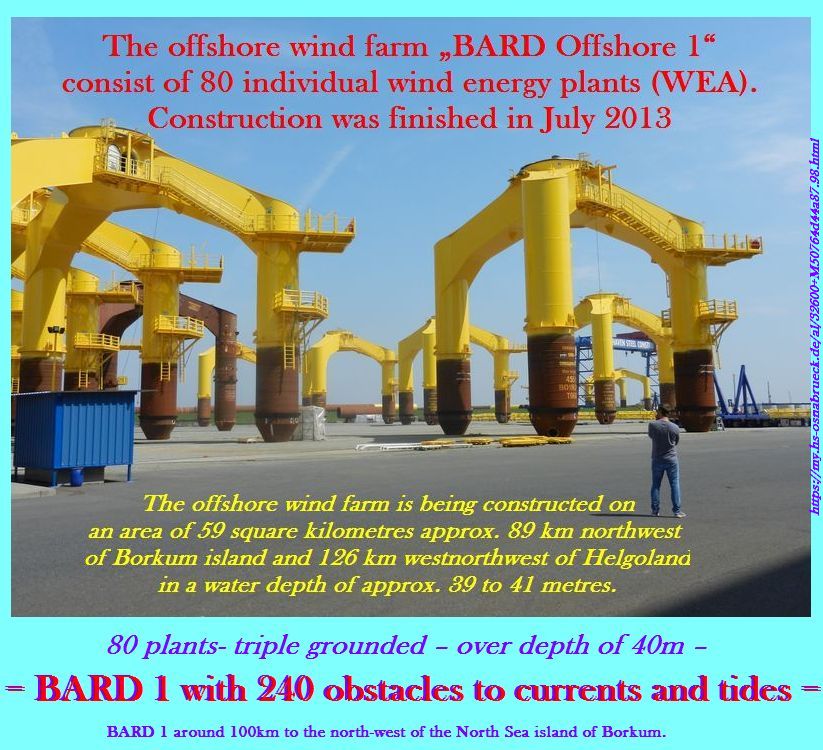 Offshore wind turbines “consume wind”, a force which is no longer available in the West Wind Drift to flow smoothly eastwards, explained a recent post (Link 1) with reference to work by Mark Z. Jacobson. Chien Wang and Ronald G Prinn (2011) found that offshore wind turbine installations cause a surface cooling over the installed offshore regions whereby this cooling is due principally to the enhanced latent heat flux from the sea surface to lower atmosphere, driven by an increase in turbulent mixing caused by the wind turbines which was not entirely offset by the concurrent reduction of mean wind kinetic energy (Link 2).

What the two papers ignore is the impact offshore installation cause due to immense obstacles between sea surface and the sea floor. They permanently change to flow of sea current and tides, altering the temperature and salinity structure on all levels. That is presumably much more relevant as what the papers discuss.

Dr. Tim Ball on: „Generalization, Specialization and Climatology”. Does it mean he explains what climate is?

Actually Tim Ball does not say what climate is, he only refers to climatology and climate science. Is that sufficient to understand, respectively enshrines a definition for the term “climate”. In a recent post at WUWT (29:June2015) that is what he said:

Climatology is the study of weather patterns of a place or region, or the change of weather patterns over time. Climate science is the study of one component piece of climatology. The analogy I’ve used for decades is that climatology is a puzzle of thousands of pieces; climate science is one piece of the puzzle. A practical approach to assembling the puzzle is to classify pieces into groups.
The problem is obvious, what is a “weather pattern”? Tim Ball is silent on it. Is it meaningless? That depends, for laymen not, because it is what they experience every day, for academic work it is utterly nonsense. Why?

Indeed, also weather – as a state of the atmosphere- is a laymen term people often communicate about. That is a very different sphere form scientific research and clear and correct scientific communication. Recently Tim Ball mentioned (25. Feb. 2014 – HERE) that Theophrastus (around 300 BC), a student of Aristotle’s, wrote a book setting out the first rules for weather forecasting recording over 200 empirical indicator. .Although Tim Ball admitted that “we haven’t come very far since. Indeed, I would argue we have regressed“, he use a climate terminology, which is similar superficial as used by main stream weather science.

The West Wind Drift supported by warm North Atlantic and Norwegian Current keep North Europe’s winter mild. How many offshore wind turbines are needed to decrease the flow of this warm air eastwards, which usually keep Siberian temperatures at bay from reaching West Europe? Today already more than 1200 turbines are grounded in a water depth down to 30 meters and more. The turbines “consume wind”, a force which is no longer available in the West Wind Drift to flow smoothly eastwards. Will it one day show an impact on the weather and air temperatures? 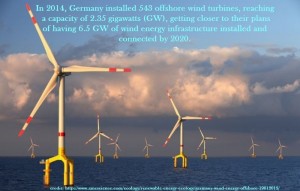 Computer simulations by Professor Mark Z. Jacobson have shown that offshore wind farms with thousands of wind turbines could have sapped the power of three real-life hurricanes that may diminish peak near-surface hurricane wind speeds by 25–41 m s−1 (56–92 mph) and storm surge by 6–79%. That is impressive, but for a reduced Hurricane Katrina’s wind speeds by 50 percent by the time it reach land a protective wall of 70,000 offshore wind turbines built 60 miles offshore from New Orleans would be needed.

On one hand the North Sea is far away from such figures, on the other hand the West Wind Drift across Northern Europe is an important factor in the Northern Hemisphere weather system where presumably much less turbines may have a serious impact. It seems neither any regulatory agency nor science has shown any interest in the matter until now.