A brief comparison between the early January 1940 and 2019

Our previous posting was about the question: “Is there another ‘Beast from the East’? The Met-Office considered it as possibility on January 03. More than a week later there is none, even though some places in Russia are currently cold but in no way exceptional. At some places the temperature will be about 7°C below average. Small regions in Central Europe (Bavaria and Austria) have been trapped in snow, but although the air temperature conditions across Europe are far off wintry. 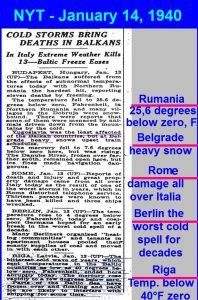 In the following compare a report on weather in the current week  (italic green) and early January 1940, which until now 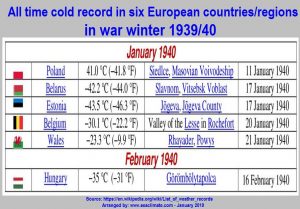 A current weather report for the second week of 2019 reads as follows (Excerpt from weather.com, Jan.09):

Deadly winter weather has blasted Europe for another day, trapping hundreds of people in Alpine regions, whipping up high winds that caused flight delays and cancellations and raising the risks of more deadly avalanches.
Temperatures will fall widely across Europe over the next few days before rising again at the end of the week.
Colder air will be in circulation on Wednesday and Thursday in a northerly to north-easterly airflow due to the position of high pressure in the vicinity of the British Isles and low pressure over the South East Europe,
This colder air will move over warmer waters and bring further snow over central and South East Europe this week, the snow will be heavier and more persistent over the Alps as well as the mountains in Bulgaria. 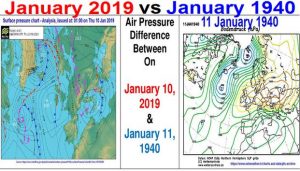 What a difference to the weather conditions Europe experienced eight decades ago already in early in January 1940, as shown by an excerpt from [ http://www.seaclimate.com/c/c7/c7.html  ]: 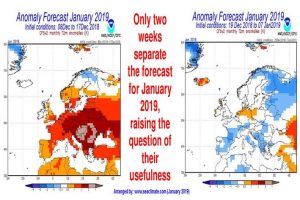 The events described and the data clearly indicate that random processes are eliminated there. Why was 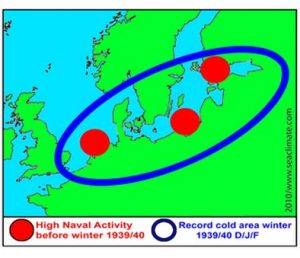 Northern and Central Europe so badly affected? Southern Europe, including Switzerland , however, was much less affected from the Arctic temperatures simply because they didn’t have naval warfare at their front door, ……

“The highs (over North Europe), however supported a uniform inflow of cold air from northern Russia and Siberia, but blocked the way for mild air currents from the Atlantic and southern latitudes.”

This statement confirms the ‘weather blocking’ situation which was man-made by stirring the regional seas.

Since 2015 a number of postings have dealt with January 1940, here an example:

Poland’s Cold Snap: ‘deadliest ever’ or: ‘most ignorant claim ever’?