“One of Poland’s deadliest-ever cold snaps killed at least 21 people over the weekend, with temperatures falling to -18C (-0.4F), officials say” 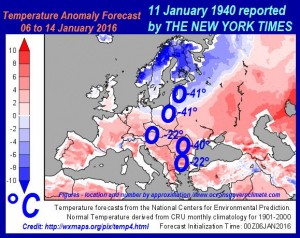 reported BBC on January, Monday, 04. . Meteorology Services underline such incompetent reporting, e.g. weather.com, instead of informing the general public that 76 years ago air temperature plugged to record lows before mid-January 1940, as reported by the New York times; 08. Jan: minus 35°C in Northern and Central Russia, and on the 11th: Romania -40°; Riga -41°; Vienna -26° Sofia; and at Siedlce in Poland minus 41° the all-time record (see map; Source). Although also a strong El Nino year, the difference between January 2016 and 1940 is tremendous, because Europe was in the fifth month of World War II, that altered the status of the reginal seas so much, that the cold snap in early January 1940 was only the beginning of more worst to come. The prospect this January is very different as indicated in the attached graphic. See for entire month January 1939 versus 2016 previous post: https://oceansgovernclimate.com/storm-frank-el-nino-insufficient-explanation/