The 2018 Annual GWPF Lecture: “Global Warming for the Two Cultures”
provides no clue 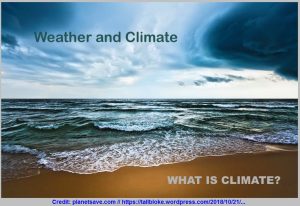 It sounds though when a speaker announces:  “This lecture attempts to force the scientists in the audience to come to grips with the actual nature of the climate system”. Indeed one should wonder when someone is talking about the “actual nature of the climate system”, without telling in the first place, how he would like to define the term, as those commonly used are of little help. But let’s start with the recent lecture.

As always, Richard Lindzen was blunt, when telling the 2018 Annual GWPF Lecture: “Global Warming for the Two Cultures”, that man-made climate change does not appear to be a serious problem.  The Professor (emeritus) of Meteorology for Massachusetts Institute of Technology says that much of accepted ‘politically correct’ knowledge is nonsense.
The lecture (55 min) is HERE. The text in PDF: HERE.

“Climate system” means the totality of the atmosphere, hydrosphere, biosphere and geosphere and their interactions. 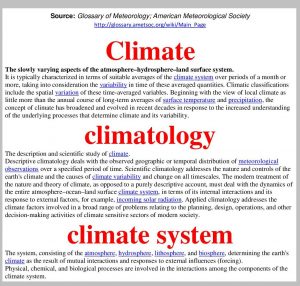 Would anyone object if someone would regard that as: “Natural system” means the totality of the atmosphere, hydrosphere, biosphere and geosphere and their interactions. According common definition: Nature is the phenomena of the physical world collectively, including plants, animals, the landscape, and other features and products of the earth. It seems difficult to detect a difference to a climate system.  However, both refer to the world of physics.

The problem with climate science is that they fail to understand that the term “climate” is a mere statistical tool, in short “Climate is average weather”, as still enshrined in a longer version:

Climate in a narrow sense is usually defined as the average weather, or more rigorously, as the statistical description in terms of the mean and variability of relevant quantities over a period of time ranging from months to thousands or millions of years. The classical period for averaging these variables is 30 years, as defined by the World Meteorological Organization. The relevant quantities are most often surface variables such as temperature, precipitation and wind. Climate in a wider sense is the state, including a statistical description, of the climate system. (Source: IPCC, AR5, 2013,  Glossary,  p. 1450)

That physical- interaction play a role is nowhere mentioned. The reference to “average weather” is still only statistic, and “surface variables such as temperature, precipitation and wind” is not weather, but mere, although important parts – of many dozen weather criteria. Assessing by “statistical description in terms of the mean and variability of relevant quantities over a period of time ranging from months to thousands or millions of years”, has little chance to produce a useful and serious discussion.

Only by such negligence Prof. Lindzen could assume that his “description of the climate system contains nothing that is in the least controversial, and he expects that anyone with a scientific background will readily follow the description.”  Here is one of his examples that show what is wrong with such much too general approach:

1st statement: The system we are loking at consists in two turbulent fluids (the atmosphere and oceans) interacting with each other…

2nd statement: It is important to note that such a system will fluctuate with time scales ranging from seconds to millennia, even in the absence of an explicit forcing other than a steady sun. 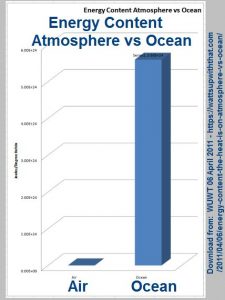 Much of the popular literature (on both sides of the climate debate) assumes that all changes must be driven by some external factor. Of course, the climate system is driven by the sun, but even if the solar forcing were constant, the climate would still vary.

First Remark: When mentioning that “The atmosphere and oceans interacting with each other…”it would be helpful to express clearly, that it happens due to water, which comes from the ocean, which governs the earth by a ratio of 1000:1.

Second Remark: The mentioned time scale up to millennia is only due to one turbulent fluid, namely the ocean, while the atmosphere without the ocean input would last for hardly more than a few weeks.

Third Remark: More than 70% of all sun radiation is received by the ocean, which has a higher storage capacity than the continents that makes the oceans to the driver of the global weather system (See last box below).

Further Reading: Ever closer to reality – Global warming caused by the oceans