The warming of the ocean remains a wide open question

Is there some movement now in the discussion about ocean warming? A research paper published, in Nature Geoscience (January 21, 2019],* the following assessment: There is no definite connection between the solar cycle and the North Atlantic Oscillation (NAO)**, 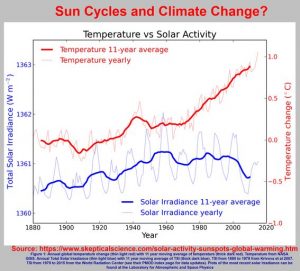 debunking the solar-cycle – North Atlantic winter weather connection. The paper focuses on 11 years cycles. While it is common knowledge that the NAO usually fluctuates over a period of a few years and has a huge effect on European weather, exactly what causes these long-term patterns, however, it remains unclear. Is it an external force, or an internal ocean affair, as mentioned in the last post about ocean warming?

** The North Atlantic Oscillation is a weather phenomenon in the North Atlantic Ocean of fluctuations in the difference of atmospheric pressure at sea level between the Icelandic Low and the Azores High. Wikipedia

As the sun provides essentially all the energy that drives the Earth’s climate system, it is obvious that solar variations have the potential to directly alter climate. So far, so good.  But what about climate change due to solar cycles? The problem starts when it comes to the question whether any of the climate changes during the last century results  mainly from anthropogenic release of carbon dioxide(CO2) in the

atmosphere, or can be partly be attributed to solar cycles. The former is by far the majority of scientists, represented by the Intergovernmental Panel on Climate Change (IPCC), while there are not only few saying that there is “proven by thousands of temperature datasets, the earth’s climate fluctuated cyclically in the past, and there’s an overwhelming body of evidence showing a close correlation with solar activity and other powerful natural factors.”

The correlation with solar cycles is now challenged the article in Nature Geoscience. The research essentially debunks what was considered a “demonstrated link” between the 11-year sun cycle and winter weather over the northern hemisphere and found it is actually, for the most part, a coincidental alignment. With the use of sophisticated computer modeling and extended observations, the new research shows that before 1960 evidence of any correlation simply vanishes. The theory was basically a mirage.

This leads to the immediate conclusion, that sun cycles have only a minor role in climate change matter. But instead considering the role of the oceans, the paper claims that: these apparent comings and goings of correlation are really due to atmospheric variability, and not the sun. How can the authors seriously assume that the atmosphere provides conditions, which can sustain a “difference of atmospheric pressure at sea level between the Icelandic Low and the Azores High” over a longer period, meaning weeks, months or even years? That is in no way thought out.  Longer weather or air pressure deviations from average have either been caused by the sun or one part or several ocean areas. The authors Gabriel Chiodo, et al. miss a crucial point in their work, namely the role of the North Atlantic’s below its surface down to the bottom. Their research is nevertheless a big step forward, as it challenges the widespread theory of the influence of the sun variations even on short cycles of 11 years. Such papers will bring climate research closer to the ocean, very little,  one small step never the less. 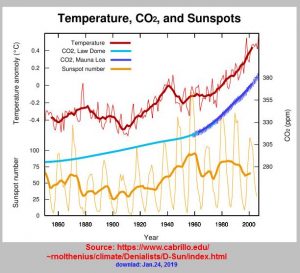 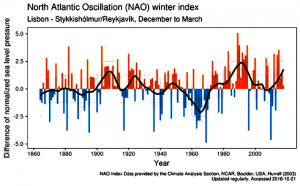 Extract from the Book (2012) “Failures of Meteorology”