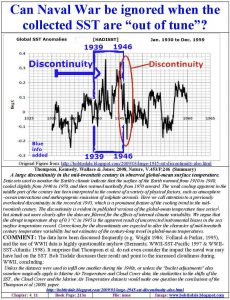 Few years ago David W.J. Thompson at al. attempt to explain “A large discontinuity in the mid-twentieth century in observed global-mean surface temperature“, published in NATURE, [Vol.453, 29May2008]. Whereas they confirmed  that the Earth warmed from 1910 to1940 the subsequent cooling is explained very superficially, namely by a “variety of physical factors, such as atmosphere–ocean interactions and anthropogenic emissions of sulphate aerosols” and of “uncorrected instrumental biases in the sea surface temperature record”. That the large discontinuity has a strong correlation with World War II is not even mentioned. Fig. 1 & Fig. 5 (Source: HERE) 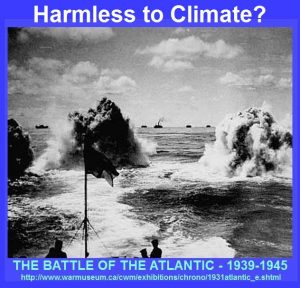 Immediately Bob Tisdale (2009) question the conclusion, due to obvious  similarities in the shifts of the SST , the cloud cover and the marine air temperature datasets (HERE),but either ignoring human activities at sea in the 1940s as well. One dozen years earlier two papers discussed “Temperature taken during World War II” [Pacific; Atlantic], by showing that a huge variety of observation need to be analyzed before considering any ‘corrections’.  But as Tisdale wonders that Thomson et al pay not any attention to other datasets showing the discontinuity as well, he either is short in asking the question: What is the cause of the observed discontinuity in the 1940s.

The convincing answer is presumably not very far away. Since September 1939 huge water masses were churned up-side-down, as a recent post 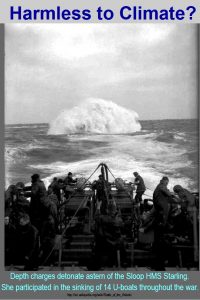 mentioned. As many ten-thousand ships plugged the sea every day, and billion objects exploded and sunk to the bottom 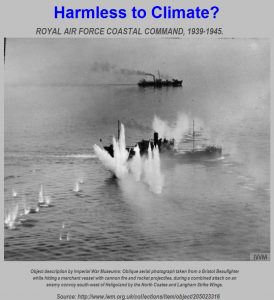 of the sea, over several dozen meters or few thousand kilometers. Aerial bombs, torpedoes and depth charges proved particularly effective. The photos are self-explanatory.  One can only wonder that interest in any human impact on climate by activities at sea hardly exists.