A Link between Atlantic sea-ice 1917 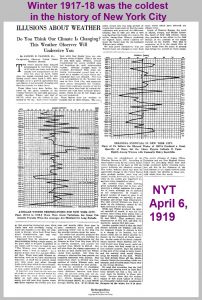 On one hand the Atlantic sea ice extent during summer 1917 is the only one ever observed (previous post), on the other hand only few month later the United States east of the Rockies winter 1917/18 was remarkably cold. It started with an unusual autumn, explained C.F. Brooks (1918): “The advance guard of our cold winter appeared on August 8 when a strong winter type of anticyclone, or “high,” entered the United States from the Canadian Northwest”.  Could that mean that naval warfare in Europe via the low Arctic winter temperature 1916/17 (see previous post) , or sea ice condition summer 1917 in the North Atlantic,  contributed to a record cold winter in the United States?

The 11-pages essay by C.F. Brooks mentions: “CONTROL OF THE WEATHER BY SURFACE TEMPERATURES. At all times, the diverse temperatures of water, land, and snow surfaces control weather details, which, when long continued, become large features. These surfaces affect not only the temperatures and moisture content of the winds, but also control the paths and strengths of cyclones and anticyclones. Water surfaces, whenever warm relative to the surrounding temperatures, always become centers of cyclonic activity and, therefore, are stormy. …cont” (PDF-HERE)

Naval war in Europe had a pronounced effect on sea water temperatures around Great Britain and in Northern North Atlantic; a contributing link to US winter condition 1917/18 is not impossible – if one takes Brooks’ remark seriously.