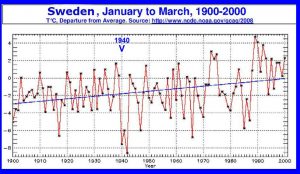 A recent guest essay by Albert Parker at WUWT, (28. April 2018) states:
“There have been many recent claims that “climate change” was the reason for conflicts, with also the war in Syria explained by the anthropogenic carbon dioxide emission. However, this is not settled science, as this claim is wrong.”

He is right and he explains it to some extent – which the interested reader should read in full HERE -, but he is talking nonsense either, when ignoring the correlation between the two World Wars 100 and 70 years ago, as discussed many times here in previous posts.

The Parker-Essay miss to analyze of the presented temperature data for Berlin-Tempelhof and Berlin-Dahlem with the caption (in red): 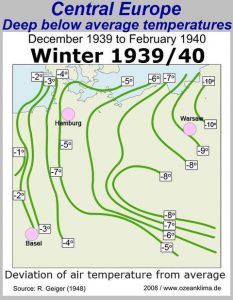 A more in-depth research would have shown that the sudden drop of the annual temperature in 1940 was actually a winter issues. Out of nowhere the winter 1939/40 was the coldest for more than 100 years, as well as the subsequent winter 1940/41 and 1941/42. In so far it is important to realize that the sudden extraordinary weather condition prevailed during the winter seasons. As the influence of the sun diminishes strongly from October to February, it is much easier to investigate the causes. When taking into account that main region of coldness stretched from Great Britain to St. Petersburg and Moscow, respectively covered the North – and Baltic Sea, it is inevitable to consider a decisive link to the huge naval activities in these semi-enclosed waters. They store heat during the summer season, which is released during winter. The more the water is churned by winter of human activities, the quicker the heat is released, diminishing the heating capacity. Cold air from the Arctic or Siberia can establish their reign over Europe up the North Atlantic. That easy was it to plunge the war winter 1939/40 to a record low.

The impact of naval war on the first three war winter in WWII is evident (see links to a detailed analysis: below).  The three 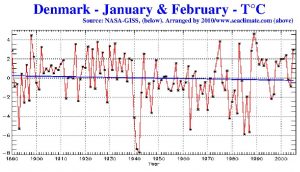 first WWII winter in Europe could serve as evidence how easy climate can be changed by human activities. Actually it happened in connection with the First World War, and moreover the three decades global cooling from 1940 to mid-1970 is a serious naval war matter.

Hence the guest blogger Albert Parker, misses the problem he discus complete, but stands in line with main stream climatology neither able or willing that oceans-govern-climate, and that they fail to prove by analyzing the impact of naval war on weather and climate in the two World Wars.