Cause big volcanic eruptions a warmer or colder world?
The lid over oceans!

A volcanic eruption in Iceland hit the headlines a few weeks ago. After a break of 800 years, another volcano erupted on Reykjanes peninsula, just 20 miles south of Reykjavik, on 19th March 2021, at 20:45h.  The event was spectacular but had no major impact. 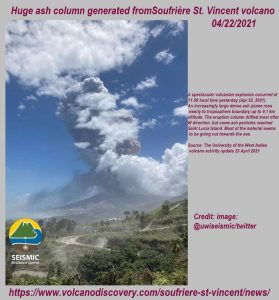 10 kilometers into the sky and that the majority of the ash was headed northeast into the Atlantic Ocean. That occurred four days short of the 42nd anniversary of the last sizable eruption, in 1979, and a previous eruption in 1902 killed some 1,600 people. Meanwhile on April 11, about 16,000 people have had to flee their ash-covered communities. Experts warn that the explosions could continue for days or even weeks, and that the worst could be yet to come. The latest news report reads: Fri, 23 Apr 2021 : Soufrière St. Vincent volcano vigorous eruption yesterday

Few weeks ago we run the story at this site: “A volcanic eruption near Reykjavik has begun! Is the world prepared for a great eruption like Krakatoa? ” Today the question is what will happen after a big volcano eruption? It seems that science is not yet prepared to provide a reliable answer. Will it get warmer or colder? The general saying goes: Volcanic eruptions cause COOLING!

Opposite view from Zambri et al. 2017

Here is at first an opposite view from Zambri et al. 2017, (Excerpts from Abstract):
Observations show that all recent large tropical volcanic eruptions (1850 to Present) were followed by surface winter warming in the first Northern Hemisphere (NH) winter after the eruption. Recent studies show that climate models produce a surface winter warming response in the first winter after the largest eruptions but require a large ensemble of simulations to see significant changes. It is also generally required that the eruption be very large, and only two such eruptions occurred in the historical period: Krakatau in 1883 and Pinatubo in 1991. …..Though the results depend on both the individual models and the forcing data set used, we have found that models produce a surface winter warming signal in the first winter after large volcanic eruptions, with higher temperatures over NH continents and a stronger polar vortex in the lower stratosphere. (cont.)

Dr. Brian Zambri et al., seem not o have cared a lot about observed details. The forceful eruption of Krakatoa, August 26-27th, 1883, was also the first scientifically well recorded and studied eruption of a volcano, from the very beginning to its disastrous ending. The magazine NATURE covered the event extensively.  The eruption of Krakatoa, darkened the sky worldwide for years afterwards. The final explosive eruption was heard 4,830 km (3,000 miles) away, 20 million tons of sulfur released into the atmosphere; produced a volcanic winter, reducing worldwide temperatures by an average of 1.2 °C (2.2 °F) for five years. Weather patterns were chaotic for years, and temperatures did not return to normal until 1888 (Wikipedia).

Willis Eschenbach dealt with the investigation of B. Zambri et al., much more critically (WUWT, 2017) by stating, among other things, that  In short, their claim that “Observations show that all recent large tropical volcanic eruptions (1850-present) were followed by surface winter warming in the first Northern Hemisphere (NH) winter after the eruption” is not supported by the evidence. And evidently, according to them, the other volcanoes are not large enough to lead to warmer winters …

Now if they actually were serious scientists, they would have noted that large volcanic eruptions are NOT followed by statistically significantly warmer winters, and they would have looked at something else. But these are not serious scientists, they are climate model believers. So instead they reached for a climate model, one of the models which are known to exaggerate the effects of volcanoes.
………
Finally, we’ve been told for years that volcanic eruptions cause COOLING … although what cooling is visible in the historical record is generally local, small, and short-lasting. But now, they say eruptions cause Northern Hemisphere winter warming? What’s up with that?

In a longer essay A. May covers a longer time period including Tambora (1815) and Krakatoa (1883). From a number of conclusions, two read as follows:

(a)  The idea that volcanoes affected climate by causing cooling on a temporal scale of less than a decade was an old one, already reported in 1940, and in the early 1970’s there was speculation that volcanoes could be a cause for glaciations. Presumably the effect of volcanoes on climate was limited.

(b) The Holocene Climatic Optimum and the Little Ice Age are not differentiated by their CO2 levels that were about the same, while volcanic activity was much higher during the HCO. What separates them is their different solar irradiation from both orbital changes and solar activity. The solar-LIA remains the only hypothesis supported by evidence, even if we do not understand well the climatic response to reduced solar activity.

It cannot be seriously questioned that a large volcanic eruption, with long-lasting sun shading by circulating ash, will have a lasting effect on global temperatures. After the outbreak of Krakatoa, it was quickly determined that the amount of solar energy received was clearly reduced for a period of several years, little attention was paid to the development of the atmospheric temperature. The blockage must have fluctuated strongly and have varied greatly, depending on the observation point. In total, the blockage effect has been calculated at an average of approximately 10% over a span of four years, whereby the reduction of solar energy in the northern hemisphere (Paris) was at its greatest in fall of 1885, reaching a value of 25%.(From Essay 1992: MORE HERE)

Now what about the question: warming or cooling? The answer is simple. There is at first a warming for some months, a few years, depending on the location in question. Close to the oceans the temperatures rise or drop will be moderate. Distant areas will get colder condition, and the average is going to drop pounced the longer the ashes block out sun ray. After few years also coastal region will feel the change. The severity of this process depends on the ocean and their heat capacity. The fairly short duration of Krakatoa’s ashes in the air reduced the impact on the just emerging industrialization. A comparable event today would push civilization toward an unimaginable global catastrophe.

Krakatoa ashes had popped a lid over oceans

This could be dismissed as coincidence if the time until 1886 had not been accompanied by another phenomenon, a “hazy fog”, a strange, smoky cloudiness in the atmosphere which was observed both in the tropics and in other areas. The hazy fog appeared as a constant companion of the extraordinary optical phenomena in the atmosphere during the entire period of the atmospheric-optical disturbance. One can say – speaking non-technically – that Nature had “popped a lid over it” and so protected the oceans from cooling off too quickly. The lid consisted of ingredients provided by Krakatoa and water vapor provided by the ocean. As a result of the “dirtying” of the atmosphere by the volcano’s eruption, the atmosphere displayed characteristics and behavior deviating from the norm. Just as fog over a water surface sharply limits the transfer of heat energy, the hazy fog must have had a long-lasting effect.

A unique climatic event, Krakatoa, was offered to science for their better understanding of big volcano eruption. Hopefully the more recent eruptions remain modest, and the next serious one is far away.