A recent paper (A)  by 32 scientists assume, “that the 1430s were the coldest decade in north-western and central Europe in the 15th century, 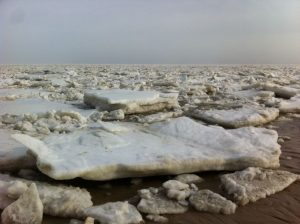 and that this decade is characterised by cold winters and average to warm summers”. No surprise that WUWT titled the story: “Cold Kills: The coldest decade of the millennium”, but merely asking: “cold kills, so why all the whining about warming?”(B), while remaining silent about the papers notion, that “…these conditions occurred by chance due to the partly chaotic internal variability within the climate system”. This is shocking. What is “internal variability”?

Leading scientists seem incapable to understand that climate (and weather) is physics, plain physics, and that the oceans, next to the sun, are the driver of the system. The oceans are so big and so cold that they can provide a cooling within a few months, sustain it over years and generate a new ice age. Referring to internal variability is a confession of failure. Chantal Camenisch and her colleagues lack the necessary competence, if they are not even able to ask what influence the oceans might have had. Why are they not being challenged to explain that the oceans have, or not have contributed? Not mentioning the oceans at all is a serious scientific default.

(A)  The 1430s: a cold period of extraordinary internal climate variability during the early Spörer Minimum with social and economic impacts in north-western and central Europe.
http://www.clim-past.net/12/2107/2016/