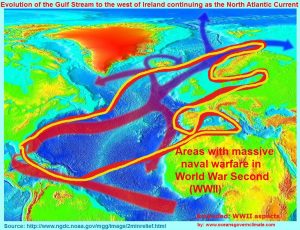 While it is challenging to assess the impact of screw driven boats and vessels on the sea surface temperature, two of the four temperature shifts mentioned by Shuai-Lei Yao are strongly connected to the two World Wars, namely 1914-1918, which contributed to a global warming from 1918-1939 and 1939-1940, which may have caused a global cooling from 1940 to 1970. These two events penetrated the sea in a much more intensive manner as peacetime shipping and fishing would do. Even the scenarios between WWI and WWII are very different, but the difference is useful to demonstrate the correlation to the climatic shifts in question.

During the First World War naval warfare happened mainly around Great Britain. The sea temperature and salinity structure of the water body was changed, which all traveled northward towards the Arctic Ocean. Since 1918 air temperatures around Svalbard accelerated strongly, subsequently warming up the Northern Hemisphere until 1939 (in the U.S. until 1933). Naval activities in Europe caused in substantial shift in the ocean structure of the Nordic Sea and adjacent Arctic

The naval war impact on climate during World War II was twofold, namely the three extreme winter  1939/40, 1940/41 and 1914/42 in Europe that started the global cooling for over three decades, and the naval war across the North Atlantic from 1939-1945 and in the Western Pacific from 1942 to 1945. (More HERE) The winters were caused by exhausting the reginal seas

from the heat store during the summer much earlier than usually.  The more serious impact on climate came with ocean wide naval activities. The ocean movements are highly sensitive to temperature and salinity structure. Only the most upper sea surface level sustains modest global air temperatures. Lower levels of a few dozen meters are colder, and the entire ocean with an average depth of about 3’300 meters is only +4° Celsius warm. Naval war penetrated the sea down to the bottom of the sea, which could be 10’000 meters.

Once naval war changed the sea structure the surface temperature is likely to change on multi-decadal timescales, which is with regard to the 20th Century closely related to post WWI warming 1918 to 1939, and the post WWII cooling 1940 to 1970. These two periods show how easy human activities can change climate, and that the often heard claim of “natural variability” is

merely a long-standing mystery. When Marius Årthun et al (June 2017) observe that “the North Atlantic is the key provider of a predictable northern climate” they should extent their interest in the impact of human ocean activities. Even the newly appointed U.S. Energy Secretary Rick Perry considers ocean waters as control knob in climatic matters (CNBC-interview). At least some progress is made toward acknowledging that climate prediction resides in the ocean.