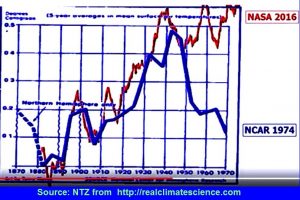 Tony Heller (HERE) calls the idea that it’s getting hotter “utter nonsense”, and being due to “station data loss and fabrication”, indicating that NASA “erased” the once unanimously agreed cooling from 1940 – 1970; (Fig. 1) Heller, who goes by the pseudo-name of Steve Goddard at his wildly popular realclimatecience site, highlights some of the many ridiculous claims climate experts and activist politicians made, and have since turned out to be a complete folly, assuming  “climate data is being manipulated to increase alarm“.  See more

The problem is that NASA seems feeling obliged to erase the global cooling (1940 to mid 1970), while skeptics are satisfied to do a bit or some bigger complaining. Neither side seems able and willing to explain the pronounced three decades long global cooling (Fig.2), which correlates with naval warfare in Europe, across the Atlantic and Western Pacific since September 1939 until August 1945, definitely a man-made cause.  For more see the following links: