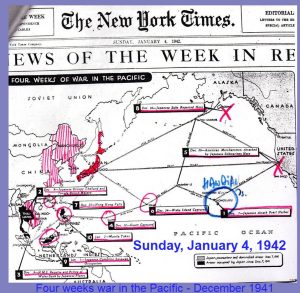 Soon Shinzo Abe is to make a historic visit to Pearl Harbour, the first by a Japanese leader.  By a devastating sneak attack on Pearl Harbour on Dec. 7, 1941, a prolonged naval war across the Western Pacific commenced.  This naval war pushed the Pacific in a cooling mood, contributing to the global cooling period from 1940 to the mid-1970s. The dramatic shift in the early 1940s in the “Pacific Decadal Oscillation” (PDO) is known for decades, but nothing about its causation. Science is unaware of the profound correlation between naval warfare and its impact on climate, and that after 75 years have passed. A profound analysis is HERE.

This major topic in a world that fears anthropogenic climate change will not be raised during the meeting of Abe with Obama in Pearl Harbor on Dec. 26 and 27. Decades have passed and no lesson learned from the impact of many thousand warship and several ten-thousand air planes involved in dozen of naval activities; bombing, torpedoing, shelling, and ploughing the sea. Any activity penetrated and revolved the sea down to dozen, in many cases down to several hundred meters. Many million objects, vessels, air planes, shells, torpedoes, and so on, sunk to the sea bottom, sometimes over many thousand meters.

It was a grand human filed experiment on climate change. It worked perfectly, while world leader pretend doing everything to minimise human caused climate change, are still unable to see the only benefit the naval war has offered: to understand Oceans Govern Climate. What a failure!