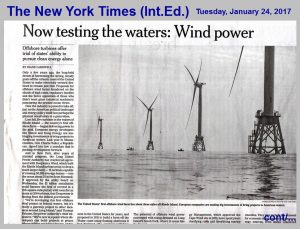 “Now testing the waters: Wind power”, titles the NYT an article concerning the first US off shore wind farm about three miles off Rhode Island. The operating started in last December. Reading the article and the company’s environmental assessment, one can only wonder about the ignorance concerning the impact seem to be in place.

The four-legs steel installations cover a distance of about 80 feet (~25 meters). The water column is permanently in move, horizontal and vertical. The water column has a high verity of temperature and salinity. Each installed object cause a mixing a

nd change of current direction; 24 hours a day. Warmer or colder water may reach the sea surface, that inevitable alter the air temperature.

Five off shore installations is not a big matter. Shocking should be the incompetence in ocean matters. There will be soon many more wind turbines installed.  There are approximately 2,500 wind turbines spinning in the ocean off the coast of Europe today. That is likely to have already a pronounced effect on the winters in Europe, particularly as far as the North Sea and Baltic Sea are concerned. More HERE and HERE. Whether the “Europeans warm their winters” could be fairly easily proven if science, public servants and companies would acknowledge that oceans-govern-climate, and care accordingly.