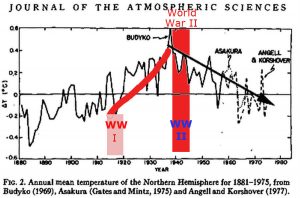 After decades of warming, suddenly winter 1939/40 became the coldest in Europe in more than 100 years, which was the beginning of a global cooling for more than three decades. The reason has never been seriously investigated, although World War Two represents an unprecedented field experiment. Instead of assessing the impact of naval warfare on weather and climate, the discussion is merely about the interpretation of temperature statistics, as indicated in the two images. Are they misinterpreted? 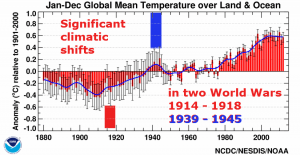 ___an excellent new post up at notrickszone.com (Sept.13, 2016) on the global cooling scare of the 1970’s and the efforts to erase it from the record by the climate alarmists at realclimate.com. For some the scandal at Wikipedia over William Connolley deliberately posting false articles and altering factual ones on climate is old news. This is for those who missed the story. William Connolley created or rewrote 5,428 unique Wikipedia articles. “Fake news” is an old story, used extensively by radical climate alarmists and environmentalists. Indeed, Greenpeace seems to be based on the concept of fake news.”  More at NTZ.    As NTZ mention:

___”, it is plainly evident that there was a great deal of concern about the ongoing global cooling, which had amounted to -0.5°C in the Northern Hemisphere and -0.3°C globally between the 1940s and 1970s.”,

one need only to ask what did naval warfare contribute since September 1939, to the extreme winters in Europe and global Temperature decline, noting that naval war took place primarily in the Northern Hemisphere, which resulted in lower mean temperatures than globally over several decades.