Cold Ocean – The best kept secret in the ‘climate world? 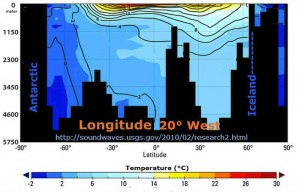 “The best kept secret in the ‘climate world’ probably is: the cooling capacity of the deep sea. Some attention is paid to the heat uptake by the oceans, but there is no attention for the cooling capacity of the deep sea. That capacity is huge and might be (and might have been) of decisive importance in climate and climate change”;  says Wim Röst in a guest past at WUWT (26.Dec.2016). 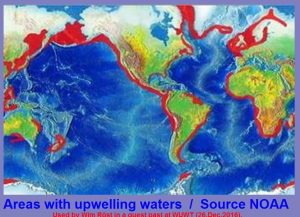 essment is important, and the essay is recommended to be read due to the fine presentation of the oceanic dimension and temperature structure. But if Röst assume “Warming by [less] Upwelling of Cold Ocean Water”, he is speculating, as no data in this respect have been collected. Even if several ten-thousand devices would be put in place, it would require several dozen decades, before it might be possible to analyze a globally relevant correlation.

As outlined in a previous post (HERE)  the only prolonged cooling period since 1850 occurred simultaneously together  with the sinking of many ten-thousands of ships and  air-planes, and billions of ammunition, as  shells, torpedoes and depth-charges, arial bombs. Not only the surface layer is affected, but the entire water column, sometimes down to 10’000 meters, with the inevitable impact that cold water is pushed to the sea surface layer. The net result is cooling.