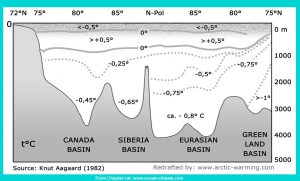 “It’s crazy.” Since 2006, the Arctic Report Card is issued annually, and the four dozen authors, miss the most fundamental aspect in their annual review ever since; facts and discussion of changes in the sea water structure concerning temperatures and salinity. There are hundreds of military, commercial , research and leisure ships navigating the open and ice covered Arctic Ocean, but  science is not even able to mention the threat by human activities. That is crazy. 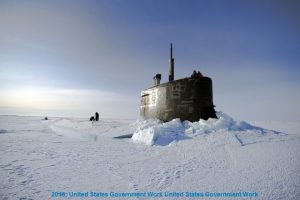 While it is a fact that a persistent warming trend and loss of sea ice trigger Arctic changes, it is necessary to acknowledge that the prime source is the sea water column, which is extreme sensitive to human activities (see image), particularly in those sea areas which are ice covered. But the repot does neither acknowledge this aspect, nor does it offer any information. Instead the “surface air temperature” is in focus and one of the leading scientists Mark Serreze, is quoted: “Personally, I would have to say that this last year has been the most extreme year for the Arctic that I have ever seen. It’s crazy.”  Indeed, the report is waste of time and money without details on changes in the water column, and telling the public about any possible impact scientific research and other activities in the Arctic may have on air temperature and sea ice cover.

Web-Site to the report: http://arctic.noaa.gov/Report-Card

The Report in PDF:  ftp://ftp.oar.noaa.gov/arctic/documents/ArcticReportCard_full_report2016.pdf