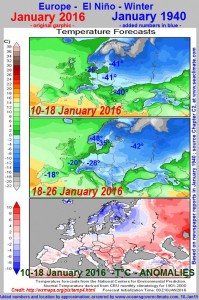 mid-1970s. After the end of 70 years copyright barrier,  Hitler’s ‘Mein Kampf’ is back in print, a book full of hate, lies, and stupid conclusions, written between 1924 and 1926. He is better known as the greatest war monger of all time, but due to failure of meteorology and climate science, was never identified as the first and worst individual who caused climate change, and called a “criminal in climate change matters”. Adolf Hitler started WWII on 1st September 1939 and only four months later Europe tumbled into the coldest winter in more than 100 years. By mid-January 1940 temperatures fell to minus 40°C at many locations from Leningrad/St. Petersburg to Sofia, with an all-time cold record in Poland. For more details see January 1940 Temp-Map. The coldness continued until the end of February 1940. But science does not know.
That all happen 76 years ago. In winter 1939/40 a strong El Niño was active, in Europe extreme cold temperatures governed. This winter, the so-called “Monster Godzilla El Niño”, influences the weather worldwide, in Europe temperatures are above average (see: Fig.). Do not ask science for the reasons for these dramatic differences. Science don’t know; and seems not to have the capacity (mental, financial, and willingness). Science shows no interest to identify Adolf Hitler objectively as the greatest climate change criminal. Science is hopeless in WWII climate change matters, a matter never barred from being investigated, published and explained.

3 thoughts on “Adolf Hitler changed climate in winter 1939/40, but science doesn’t know why”