Dinosaurs wiped out by … Darkness and Cold 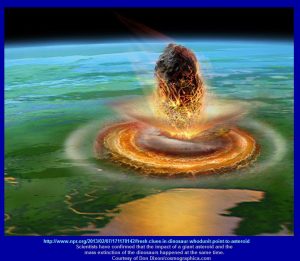 “To investigate the sudden extinction of the dinosaurs about sixty six million years ago, the scientists for the first time used a specific kind of computer simulation normally applied in different contexts, a climate model coupling atmosphere, ocean and sea ice”; says PIK. However little information is provided about data and possible role of the ocean,

Instead the only physical reference is according Julia Brugger from the Potsdam Institute for Climate Impact Research (PIK), and lead author of the study: “The big chill following the impact of the asteroid that formed the Chicxulub crater in Mexico is a turning point in Earth history.” [Publ. 13.Jan.2017] That is certainly too petty-minded view, when the global annual mean surface air temperature dropped by at least 26 degrees Celsius.

It is the common problem with PIK. They build on research showing that sulfur-bearing gases that evaporated from the violent asteroid impact on our planet’s surface were the main factor for blocking the sunlight and cooling down Earth. No word about the role of the oceans with an average temperatures as low as about 4°C. Ocean dimension matter, as well is their service to the atmosphere with regard to temperature, evaporation, humidity, wind and ice-cover. This is another annoying example by many scientists to disguise their fuddy-duddy research on “computer simulation”.